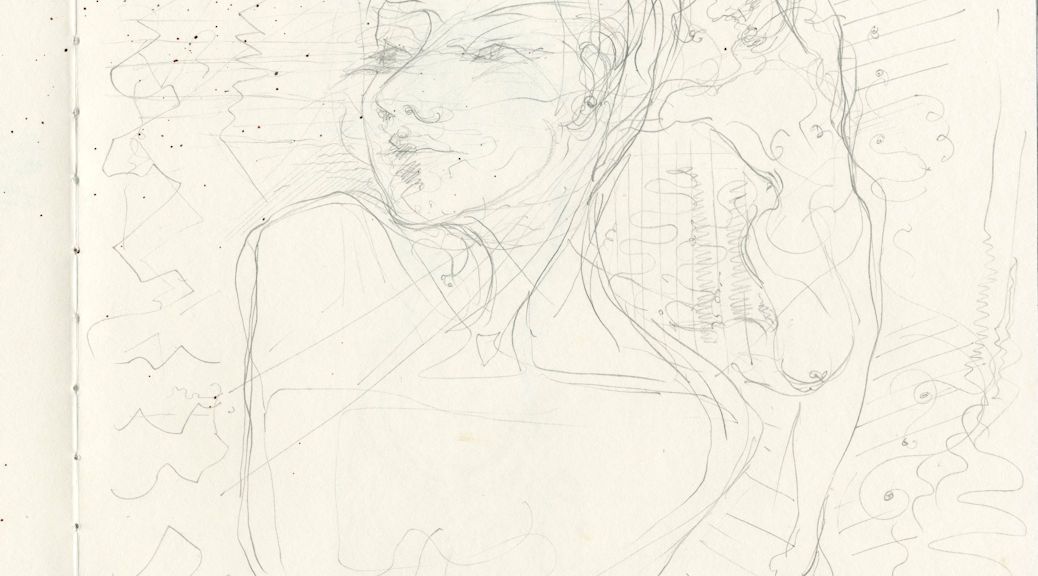 Synaesthesia is not much a part of Western culture, unlike 17th C India where modal music – the Ragas – were expressed through paintings – the Ragamalas. The modes carry associated colours, hours, seasons and verses. Indian musicians sit before these pictures and literally play them.

Classical Hindustani musician Sadhana has a website to explain the basic concepts of Indian Music. Without hesitation she begins by comparing a palette of colours in painting to describe both the playing and the construction of ragas.

It is difficult to see why in the West it is thought strange, when singers talk of ‘colour’ although they do not mean anything one can see. Presumably, without becoming involved in what is meant by the western medical definition of an identified condition, presumably synaesthesia is a cultural development in the wiring of the mind.

During many hours of painting in the studio, I used to listen to music until at one point the music took over, demanding that I draw the sounds. The images are not intended to communicate the experience of listening to the music, nor to provide a musical text, but they arise from it.

The Legende in G minor Op.17 by the virtuoso violinist composer Henryk Wieniawski has an undercurrent of bassoons. He wrote it to win his fiancée Isabella Hampton, and succeeded, so they say. It is romantic but precarious too, like Wieniawski’s life that ended at 45.

Just listen to the music.

(If you can’t access this on the ipad then you can use a free youtube converter to convert it to an MP4 file, then it will play. This is the URL https://www.youtube.com/watch?v=wUD0Z0Hmrv8 to paste into the converter.)

I have heard critics describe Maurice Ravel’s music as unemotional, mathematical. This surprises me. Perhaps they mean that it does not follow a single emotional trajectory, but slides in the spaces in between, which I find truer of relationships. Sometimes tantalising and so nearly something, that becomes something else, and on again.It is no less feeling to go through these changes although they cannot be pinned and boxed for convenience.

Anyway the dance is at the heart of it, and drawing Ravel lead me on again to a series that I can only call the chicken gods. They are all masked, which for a painter of portraits is a strange release – allowing the dancers to say what no-one wishes.