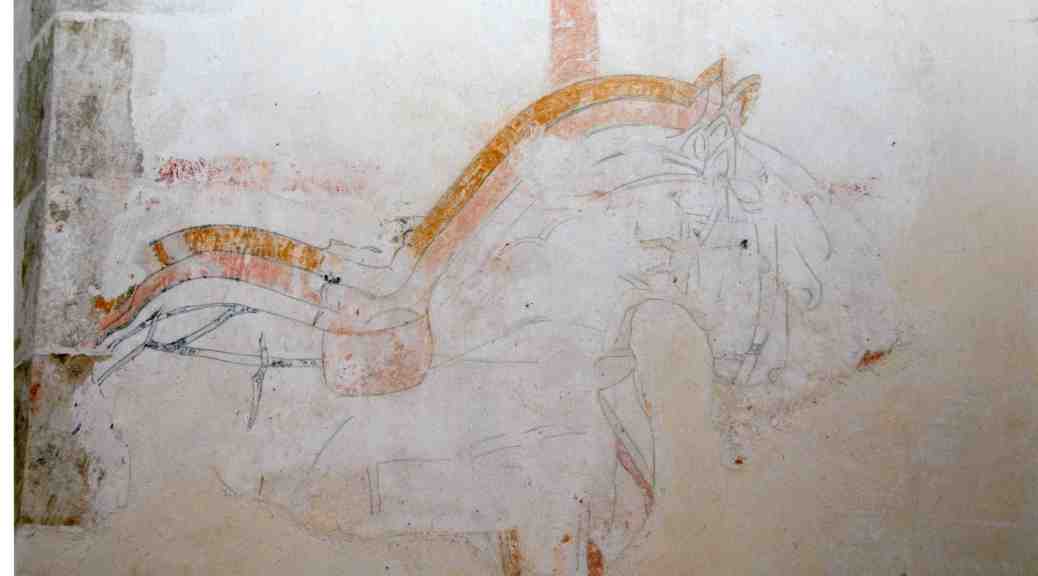 The walls of medieval churches were smothered in paintings. There were many schemes and many artists interpreting them. Parishioners took a pride in raising the cash to update them. They were changed roughly every twenty-five years, or when someone left money, or something happened. The pictures altered with fashions or changing ideology, but they were there to influence behaviour.

Early on, Christ the Creator of the World was joyfully painted on the chancel arch. Later centuries indulged in the horrors of the last judgement, with the snapping jaws of hell swallowing doomed little figures herded by demons with toasting forks. In 1547 the party came to an end with the banning of all images in English churches, at the Reformation. Out came the pails of whitewash and villagers breathed easy again.

When a rainstorm poured through the roof of tiny St. Mary’s in Hartley Wintney in 1842, it washed the white away. The churchwarden stood aghast at ‘figures under canopies in very brilliant colours’ and quickly hid them. He then punched through the wall to build the transepts, but slowly pictures remerged on the north wall, tantalising fragments lingering on.

This one is dated by conservators as early 13th century. St. Mary’s had been built by the local Cistercian nunnery around 1234 and so it may be one of the original schemes. At first, I struggled to recognise anything in it although assured by conservation reports that it depicts horses. The bands of coloured lines are their backs.

My problem was to help the visitor to see them and to care about their preservation. Working with the photographer Tim Earney, we developed a simple method. Printing his photographs onto archival paper I carefully picked out every suggestion of line or spot of paintwork, drawing in pencil to see what that might reveal. Once the harness appeared the anatomy of four horses emerged.

Stains, dust, particles of later paintings, patches of plaster repairs, all confuse what may be perceived. The marks are so enigmatic that even the precise position of the nostrils is in question. There appear to be a row of ovals like nostrils but when these are drawn in the horses’ heads are too long for their backs. What they are is a mystery.

The horses are good fast coursers or rouncies, not hacks, and are expensive like their harness. They appear to have no riders. Perhaps they are pulling something, but the window was installed in the 1800s and what followed is lost. There is no other painting like them. What could they be?

Four riderless horses were prophesied by Zachariah to foretell of John the Baptist, and the Song of Zachariah was sung by Cistercian nuns at Lauds to greet the Rising Sun of Christ, who was painted on the chancel wall. But the horses at Hartley Wintney have tack, so the jury is still out.

The nuns of Wintney Priory had their own church a mile away, down a path through open fields to their convent by the marsh, but the Mother Superior governed what was painted in St. Mary’s. By the 15th century, the north wall carried a glorious depiction of the Seven Deadly Sins to remind the parishioners what they should not do.

Deadly Sins paintings had little images of sinners arranged around a central figure, or sprouting from a tree. There were other designs, but the tree or large figure were the most popular. In nearly all of them, the sinners have dreadful devils waiting to cart them off to hell.

The nuns in their wisdom chose a large naked man to form the centre piece of their Seven Deadlies. A gallery, built in 1834, cuts across his body, but lovers cavort on the lower wall near his thighs, and gluttony guzzles on her knees above his shoulder. Unusually, St. Mary’s has no demons. There is not a single faded shadow of horn or leering monster.

Did the nuns have a healthier vision of the naked body representing the soul? Prioress Alice Fyshide 1385-1425 had full control of her convent but not always of herself. In 1405 the Bishop heard that Alice had a chamber in which she consorted day and night with lay brother Thomas Ferris. Ten years later the Diocese visited, and Alice resigned.

Sister Petronella Pigeon had an affair with a man called Pratt, but still became Prioress 1460-98. No doubt these were momentary aberrations in the convent’s 400 years of prayer. They do however coincide with the date of the Seven Deadly Sins painting in St. Mary’s Hartley Wintney.

The purpose of a Sins painting was to help parishioners confess. At Imber’s St. Giles red devils leered around Gluttony, Lust, Slot, Envy, Anger, Avarice and Pride. It was a new addition from lord of the manor, Sir Walter Hungerford freshly promoted on the battlefield of Bosworth 1485, and just returned from a diplomatic visit to Rome in 1487, where he might see works of the new Renaissance.

Now you may struggle to make any sense of these hotchpotch blotches, as I did in the dim north aisle, but aided with a photograph by Peter Lankester, I took to drawing again. It helps to know what should be there. This design appears to be based on a tree, with strong brown branches and tendrils.

The upper portion only remains of the scheme. As well as scraps of pigment, there are many patches of grey and pink plaster disfiguring the image. Sorting it out is not simple, and still a best guess.

The conservators identified Avarice with his money bags, top left. Avarice appears to be riding a lion. He has a label floating like a ribbon above his head, and a horned demon awaiting him.

By drawing, more can be identified. To the right, a shiny patch with blue is the breastplate of Anger, probably stabbing himself in the head – which was a recognised act of rage in the 15th century. He seems to be riding a horse or mule.

Curiously, the demon to the left of Anger faces away from his tormented sinner, to the centre of the painting. I puzzled for hours over the strange Mickey Mouse ears of a devil that I had never before seen depicted. What could it be? What should be there? The answer is Pride, the worst sin of all, riding high on the tree and usually depicted as a woman. Then she rode into view.

It was not an eared demon, but the space left where the beautiful woman of Pride had once been. Revealed by the line of her throat, her neck, and shoulders, wearing a trim belt and fine sleeves. Above her head are lines which may be a label, or an ornate headdress like these Butterfly Hennin c 1470-1485 made by Kat’s Hats. The Yorkist Queen Elizabeth Woodville wore such a hat.

The Yorkist reign ended with the death of Richard III at the Battle of Bosworth, where Sir Walter Hungerford of Imber ensured his fortune by fighting on the Tudor side.